To share your memory on the wall of Sean Waterman, sign in using one of the following options:

On the afternoon of Tuesday, September 8, 2020, Sean J. Waterman passed away after a years’ long battle with cancer. Sean was surrounded by family, friends, and in the arms of his soulmate and ... Read More
Obituary written and submitted by family:

On the afternoon of Tuesday, September 8, 2020, Sean J. Waterman passed away after a years’ long battle with cancer. Sean was surrounded by family, friends, and in the arms of his soulmate and wife, Tina. He was 49 years young.

Sean was born on November 11, 1970 in Los Angeles, CA to Frank and Doreen Waterman. He graduated from Venice High School and immediately enlisted in the United States Coast Guard. He served his country from 1989-1999 and was honorably discharged from service. In 1999, Sean joined the San Diego Police Department as a member of the 44th San Diego Regional Police Academy. He protected the citizens of San Diego from 1999-2007. He worked various patrol, investigative and specialized units within Eastern and Mid-City Divisions.

In 2007, Sean lateraled to Murrieta PD. He dedicated the next 12 years of his service to the citizens of Murrieta, CA. He worked patrol, K9, and investigations. He was a member of the department’s SWAT and sniper team, and also a department firearms instructor. Sean retired from the Murrieta Police Department in 2019.

Sean served his country and communities with distinction, honor, and respect. He was awarded several citations during his tenure with the United States Coast Guard, San Diego Police Department, and Murrieta Police Department.

On September 30, 2000 Sean married his love, Kristina. They were married for 20 years, but their soles will be intertwined forever.

Sean was known as a dedicated family man and loyal friend who impacted the lives of all he connected with. Sean loved country music, whiskey, camping, going to the river, artwork, woodworking, fitness, playing the guitar, playing competitive games, watching sports, but most of all he loved two-stepping with Kristina.

Receive notifications about information and event scheduling for Sean

We encourage you to share your most beloved memories of Sean here, so that the family and other loved ones can always see it. You can upload cherished photographs, or share your favorite stories, and can even comment on those shared by others. 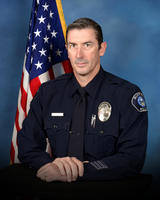