To share your memory on the wall of Therese Barnett, sign in using one of the following options:

Therese was born to Clare and Thomas Falvey on February 17, 1930. The youngest of six, she was raised in Los Angeles in a lively household with her brother Tom and four sisters, Mary, Frances, Agnes and Clare. She had many happy memories of her childhood: walking to the grocery store with her mother, going to the movies with her dad, climbing into the backyard tree to read her favorite books, watching her older siblings roll up the living room rugs to dance with friends to tunes hammered out on the piano, and numerous adventures with her high school girlfriends.

At the age of 23, Therese met the love of her life on a blind date. Although somewhat irritated

that John was late (he had stopped to shine his shoes and locked his keys in the trunk), it didn’t

take her long to realize she had met her mate. Six months later they were engaged. Six months

John were married for 52 wonderful years, sharing a great love, much laughter, a sense of

adventure, and a commitment that was inspiring to witness.

Mom and Dad began their family in Whittier, California, later moving to their Bowling Street house in Anaheim, where they raised their children Susan, John, Terry, Tom, Jamie, Maureen and Stephen. They were ardent parents. They took parenting classes, read parenting books, and prayed for their children every morning. They instilled in their daughters and sons a love of music, fun and laughter, and a deep sense of confidence and responsibility.

After more than 25 years in Anaheim, Mom and Dad moved to the Temecula Valley wine country where

they built their dream house and enjoyed family visits and community activities like golf and community theater. Eventually, they settled into a small and lovely house in The Colony in Murrieta.

Mom was devoted to her marriage and family and was an active partner with Dad in leadership in World Wide Marriage Encounter and at their Anaheim parish, St. Justin Martyr Catholic Church. They were also founding members of St. Catherine of Alexandria Catholic Parish in Temecula and of St. Martha’s Catholic Parish in Murrieta, participating in welcoming ministries, Bible study, and other ministries.

After Dad passed away in 2006, Mom remained at The Colony, continuing to nurture close friendships, performing volunteer work, and carrying on as the matriarch of her large and active family. She succeeded in living independently until the end, maintaining her own house beautifully, and gracefully appreciating the support of her children.

Throughout her long and rich life, Therese loved reading and was devoted to her deep spiritual

faith. Among her favorite authors were spiritual writers Richard Rohr and Henri Nouwen, whose

writings inspired her and provided much comfort. She was a life-long learner who always worked to grow in the understanding of others and expand her perspectives. She was an extremely positive person who was well known in the family for exclaiming “Oh my stars!” and “Thank the Lord!” She was an amazing role model for her entire family, all of whom are immensely proud of the amazing woman that was Therese. Her spirit will carry on in their lives.
Read Less

Receive notifications about information and event scheduling for Therese

Print
"The Barnett family is planning a private service. Your thoughts and prayers are appreciated. In lieu of flowers the family suggests a donation to Hospice of the Valleys (https://hospiceofthevalleys.org/) in recognition of the amazing care they provided Therese and her family."

We encourage you to share your most beloved memories of Therese here, so that the family and other loved ones can always see it. You can upload cherished photographs, or share your favorite stories, and can even comment on those shared by others.

Posted Sep 23, 2020 at 12:23am
I never met my mother in law. She died well before I married her son. But I met and got to know my mother in law's sister, Aunt Therese. I was told by my husband that his Aunt Therese was the closest sister to his mother. Like two peas in a pod. I got to know Therese throughout the years. We went to see her in Murrieta at least once a year. Especially after her husband and other sisters died. I feel like I got a glimpse of what my mother in law would have been with Therese but also what a woman of faith would be like in this day and age. God bless her and her seven children. If she is not in heaven God help us all. She's one of my most favorite people and will miss visiting her.
Comment Share
Share via:
MC

Posted Sep 21, 2020 at 11:57pm
Nettie and I thought so very highly of our Aunt Therese. It was always a pleasure to be with her or talk with her on the phone. She prized each member of her family and was grateful for all they did for her. She was very proud of her seven children and each of their families, down to talking about her most recent great grandchild. I never heard say an unkind thing or complaint about her family. She delighted in talking about each one.
Therese, say “Hi” to our dear Uncle John.
––Michael and Nettie Cox 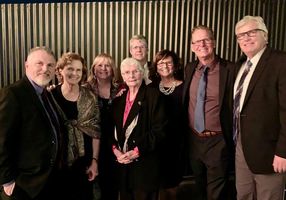 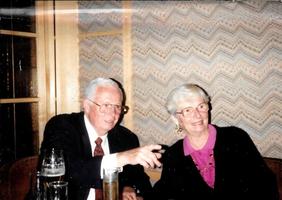 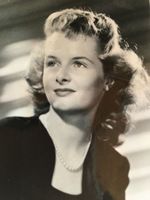